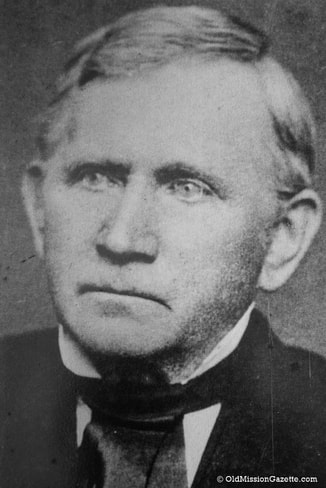 In 1839, the Reverend Peter Dougherty was sent to the Grand Traverse Region (Michigan) by the Presbyterian Board of Foreign Mission to establish a church and school for the Native Americans who inhabited the area.  He arrived first in Elk Rapids. In June of that year, Chief Ahgosa of the Grand Traverse Band of Ottawa and Chippewa Indians, living on what is now Old Mission Peninsula, asked Dougherty to move his mission to the present day site of Old Mission, Michigan, 18 miles from present day Traverse City. The mission was established under the terms of the Treaty of 1836, or Treaty of Washington, at the request of the Native Americans, and the federal government paid the Presbyterian Board of Mission $3,000 per year to maintain the mission.

In 1842 Dougherty built his “Mission House”, now part of the Dougherty Historic Home Site, in a settlement which consisted of a church, schoolhouse, bark houses, and cabins.  The home is believed to be the first frame house in the northern lower peninsula, north of Grand Rapids.  Dougherty stayed here for more than a decade, teaching and farming.  The peninsula was established as a reservation, so Native Americans could not purchase land on it.

When the state government opened areas of Leelanau County where Native Americans could purchase land, Reverend Dougherty and many of his Native American followers decided it would be better to move their homes to this more secure location.  In 1852, they moved across the bay and established their “New Mission” in what later became the town of Omena.  That mission church still meets in the Summer, and there is a museum in Omena devoted to it. The village and peninsula Dougherty left then became known as the “Old Mission”.

In 1861, Dougherty sold his home at Old Mission to Solon Rushmore.  It remained in the Rushmore family for approximately 100 years.  The Rushmores farmed the land and later turned the home into an inn which, with its ten guest rooms, catered to resorters arriving by steamship.  This inn was among the first guest homes in the area.  1956, the home was placed on the Michigan Historic Sites Register.  In 1961, it was sold to Virginia Larson and after her death, her heirs, David and Dan Larson, granted an option to purchase the home and its 15 surrounding acres to the Grand Traverse Regional Land Conservancy. The home stood empty for many years. In 2006, it was acquired by Peninsula Township and today it is administered by the Peter Dougherty Society.

In 2008, an ice house matching the foundation dimensions and appearance of the original Rushmore ice house was discovered and moved from a nearby home site, restored and erected on the old ice house foundation.

In 2009, a privy, originally built by Durante Rushmore in the 1880’s when the house began functioning as an inn for summer visitors, was restored using wood from a collapsed 1870’s barn near Bowers Harbor on Old Mission Peninsula.

Also, in 2009, a one-half mile Heritage Trail and Handicap Trail was developed.  The trail is well marked and there are 3 benches along the trail for visitors to rest and enjoy the scenery. Please enjoy it in compliance with the Governor's Executive Order requiring face masks and social distancing.

In 2010, work began on restoring the adjacent Rushmore era summer kitchen/carriage shed.  This restoration included rebuilding the foundation, replacing damaged siding, adding a cedar shake roof and reestablishing the interior.  This restoration was completed in 2014.

From 2012 to present, some restoration has been completed on the home; the roof has been reroofed in cedar shakes and all windows and doors have been repaired and restored.

The Peter Dougherty House, later known as the Rushmore Inn, and today known as the “Mission House”, was placed on the National Historic Register in 2011, securing its proper place as a significant part of Michigan and Native American history.