Rev. Peter Dougherty, Presbyterian missionary, was busy saving souls back in 1842 when he built a house on Old Mission Peninsula.

​He would no doubt be surprised — nearly 175 years later – to see archaeologists digging up the ground near the original outhouse.

Archeology professor Kerri Finlayson, several of her students at North Central Michigan College in Petoskey and local volunteers worked methodically in and around the house and its 15 acres of grounds in Peninsula Township. They discovered numerous small items used by the Dougherty’s in daily life.

Preliminary analysis of the relics found include ceramics from the Dougherty period, and ceramics from Staffordshire, England. Cut nails and fragments from ceramic pipes (smoking pipes), a toothbrush, a playing marble, some coins, a wooden bucket with a pulley mounted on it, and a few arrowheads have been identified.  Research will continue to clarify the origins of these artifacts.

The dig is just one part of a plan to unearth and preserve the history of the Dougherty Historic Home Site, which is thought to be the oldest frame home in Northern Michigan. Any artifacts found will represent a direct link to historically important information about life for those early settlers.

“They worked out a grid, then scraped down a layer at a time,” says volunteer Marty Klein of the dig. “They found small bottles, pottery pieces and a couple of metal pieces.”

It is not the first archeological dig at the site. A previous dig  by Nancy Warne focused on artifacts associated with a period starting in 1870 when the Dougherty house began serving as the Rushmore Inn.  That search turned up similar items, many of which are on display in the house. 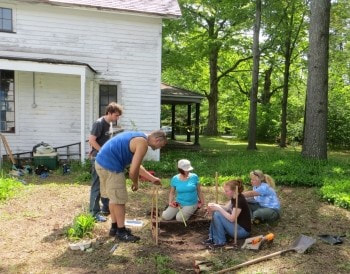